With its introduction to the application’s English version, CATCH TABLE expects foreign travelers who visit Korea to easily find great restaurants in Korea.   Yong Tae-Soon, CEO of Wad Co., Ltd., announced on the seventh that CATCH TABLE released an English version of the application and that it can be downloaded from the App Store.   CATCH TABLE explained that the intention of launching the English version is to promote Korean delicacies. Specifically, it aims to help foreigners who visit Korea to easily find good restaurants in Korea by using the application.   The number of tourists is on the rise as COVID-19 testing is unnecessary for incoming travelers visiting Korea. Moreover, Korea allowed foreigners coming from 112 different countries to enter without a visa, also leading to the influx of tourists.   CATCH TABLE is an application service that allows users to quickly and conveniently make live restaurant reservations. It provides a reliable service considering that more than 2 million Korean users actively visit the app just within two years of its first launch. The best part of this service is that the complicated communications, such as phone calls and emails, are removed in the reservation process. Particularly, users express high satisfaction on live reservations that are available twenty-four-seven.   CATCH TABLE has services that foreigners may be interested in, such as customized curation list of Korean foods. It also plans to continue updating furthermore in the future. CATCH TABLE also provides additional services. Users may filter restaurants by △ Date △ Number of Parties △ Price △ Food type and △Table Type. Other information, for example, valet parking and corkage services may be checked at once as well. It also provides discount tickets on restaurants listed in the famous guidebook.   According to one of the employees at CATCH TABLE, “We decided to start developing our English version because there were numerous requests on launching it”. He also stated that “incoming travelers in the past had a hard time emailing and waiting for an answer from restaurants to reserve seats; however, now they can search and easily reserve premium restaurants any time based on dates, time and number of parties”.   이동희 기자 (lee.donghee.ja@gmail.com)application introducing english version catch table application service 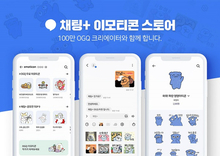 Social creator platform OGQ has announced the launch of Chatting+ Emoticon Store on August 26.     Chatting+ is a next generation messaging service that goes beyond traditional text messaging limited to SMS and MMS. In addition to large file transfers, high resolution photo and video sharing, Chatting+ features other functions such as emoticons, a typing indicator, and read receipts.     OGQ will provide various styles of emoticons created by its creators through the Chatting+ Emoticon Store. About 58,000 sets or 1.4M pieces of free and paid emoticons created by one million OGQ creators will be available to Chatting+ users.     Chatting+ Emoticon Store is developed and operated in partnership with Samsung, OneStore and three telecommunication companies: SKT, KT, and LGU+. Starting with Samsung's Galaxy Z Flip 4 and Galaxy Z Fold 4 models, the feature will be installed and available on various Galaxy smartphones in the future.     Jangwon Choi, the head of department at OGQ said, “OGQ plans to provide a variety of content through the Chatting+ Emoticon Store, so that the existing standardized messaging service can be more fun and intimate. We will continue to expand creator ecosystem, so that our creators can meet more fans in the future.”   OGQ is a copyrighted content marketplace providing digital content such as emoticons, images, videos, fonts, sound sources, and coloring sheets available for use under streaming and download licenses. Currently, there are 1M active creators and 17M global users on the OGQ platform. OGQ services include OGQ Backgrounds, NAVER OGQ Market, and Afreeca TV OGQ Market.    김진우 기자 (kim.jinwoo.ja@gmail.com)chatting emoticon emoticon store messaging service creators will