Jung Hun Choi, CEO of YIDO, presents as a speaker at the first Conference of the Global Climate Action Fund 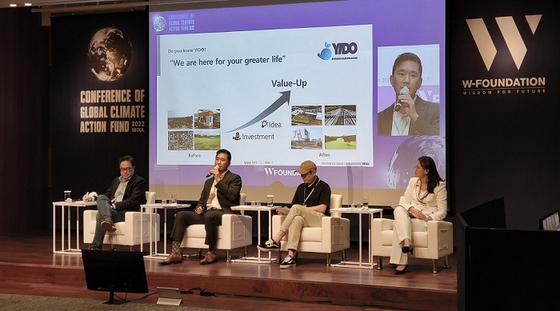 ▲ Jung Hun Choi, CEO of YIDO, presents as a speaker at the first Conference of the Global Climate Action Fund. (Photo by YIDO)

Jung Hun Choi, CEO of Yido, attended the first Global Conference of Climate Action Fund (GCAF) as a speaker and made a presentation on how to respond to climate change. Yido is an environmentally friendly company, which is the sole “Value-UP” platform in Korea.

CEO Choi made a presentation at the 2022 GCAF, held at the Shilla Hotel in Seoul last month. Of all the eco-friendly companies in Korea, Only Yido was invited to the conference.

"We have a complete value chain of waste disposal that connects waste processing, recycling, incineration, and landfill. Through the modernization efforts, we have successfully established an automation system which doubles the amount of waste recycling while reducing fine dust and noise," said Choi at the conference.

He also said, “As plastic recycling is gaining prominence globally, YIDO focuses on thermal recycling by using its incinerators,” and added “YIDO also plans to utilize excess heat generated by the incineration of plastic waste for plants or smart farms while reducing the emission of carbon dioxide during the incineration by applying its CCU technology.”

Last June, YIDO was selected for a National Assignment of the Ministry of Science and ICT to develop CCU Technology with 12 other related companies, including Hyundai E&C and Lotte Chemical.

Regarding new and renewable energy areas, Choi elaborated, "We are constructing 100-MW solar power generation facilities and pursuing 400-MW offshore wind power business in sea-affected farmland, which is difficult to cultivate, without damaging the forest."
He added, "We expect solar power generation facilities in sea-affected farmland will reduce the carbon dioxide emission by 54,000 tons while offshore wind power generators will reduce as much as 506,000 tons per year."

Choi also said that he is willing to invest in environment-related startups. He noted, "There are many environmental startups related to waste management worldwide, but we have only a handful of them here in Korea. I hope to see more young bright talents jump into environment related areas."

CEO Choi explained, "YIDO's vision statement is that We Are Here for Your Greater Life!" by mentioning Space Sweepers, a film about solving the problems derived from space debris. He concluded his presentation by saying, "We will continue our efforts in various angles for better life of all humankind."

In addition, Jinho Kim, the producer of the movie titled Law of Symbiosis 2, made a presentation about the roles of the media, entertainment businesses and eco-brities on environmental issues. Also, he introduced the "Project STOP," in Indonesia, which is an activity led by Markus Horcher, director of Borealis Group, the Austrian global chemical company, to reduce plastic wastes discarded in the sea.